How do I put a candidate on hold for later?

At times you may want to put a candidate on hold, but have them re-enter your hiring pipeline at a later date.

To do this in Trakstar Hire, click the arrow next to the Reject button on the Candidate's Timeline. You'll then select "Put on Hold": 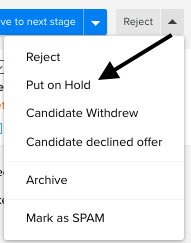 Next, pick the date you'd like the candidate to re-enter the process, and add an optional note. The candidate will exit the hiring pipeline (and your candidate list) until the on hold date, when they will be added back to the stage they were in when you put them on hold: 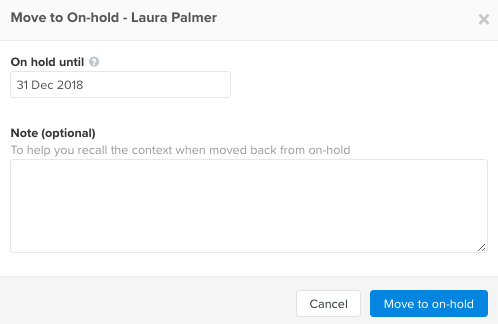 During this on hold period, the candidate will also display as "On Hold" when viewed in the system:

You can remove the candidate from the hold status from the Candidate Timeline or edit the on-hold period at any time on the right side of their profile:

Have questions? Email us at hire@trakstar.com!